This post may contain affiliate links, which means I may receive a commission, at no extra cost to you, if you make a purchase through a link. Please see my full disclosure for further information.

When I started making extra money online I did surveys with survey sites. It’s not a lot of money but it does build up at the end of the month. And not all of these websites are just about surveys. Some have product reviews where they send you a product to test and review for them. Others have small tasks that you can complete like searching the web and watching small videos to earn extra cash on their site.

Note: This post contains affiliate or referral links to the products I recommend. I only recommend products I have tried myself and like. I may receive a small percentage of the sale at no cost to you.

I’ve tried many survey sites and so far these are the ones I have cashed out or redeemed my points for gift cards.

They do take a while to build up, but they do work. And it’s nice having a little extra cash at the end of the month.

I also learned you can get bitcoin for some of them too, however, I don’t know much about bitcoin though. I’ve earned some and will create a post about more information about my findings in the future.

This is the first survey site I signed up for. I was skeptical and thought it might be some sort of scam but decided to give it a try after doing some research about it.

Swagbucks is where you earn points in the form of Swagbucks or SB (their points system) for doing various small tasks like watching short videos, searching the web, and completing surveys.

After accumulating about 500 Swagbucks or more you can use them to get a gift card like Amazon and other participating stores. You can also use your points to enter sweepstakes to win a $1,000 Swagbucks shopping spree or game console.

Although it is difficult to win a prize in their sweepstakes and may seem like you`re wasting your points away in them, it is possible to win. I myself have shockingly won a $1,000 Swagbucks shopping spree once. I used my winnings towards PayPal and Amazon gift cards, that was a big win and can say that this site is legitimate.

With this survey panel, you can earn $3.00 per completed survey. It might take a while to be accepted at first though, it took me a few weeks to get accepted. And when you do get accepted try not to miss a survey or they may think you are inactive and remove you from their survey panel.

After completing a survey, you earn points that you can save up for a gift card or whatever product they have in their prize catalog.

I don`t participate in this one as much anymore because it`s difficult to complete the surveys because I get screened out a lot. However, I did earn enough points for a PayPal card that took roughly four to six weeks to receive.

DailyRewards is where you take surveys and can earn from 25 cents to $1. When you reach $30 you can receive your money in the form of a check or through PayPal.

MySurvey is pretty simple you earn points for completed surveys. You can trade your points for a gift card once you reach 1000 points.

Here you earn points for completing surveys that you can use towards various gift cards from participating companies like PayPal. And if you are screened out of the survey you can still earn five points and try their mini-survey to earn points for their mini sweepstakes.

I haven’t used my points for their other sweepstakes though because they cost a lot of points for a single sweepstake ticket. I rather save my points up for a gift card.

This one takes a while to earn enough points for a gift card. I had to earn over 60,000 points to get the $20 gift card I wanted. There is another way to earn points like participating in polls and conversations but read the rules before you participate in them.

I was hesitant in joining this website because the site I initially tried to join was Opinion World Surveys that led to this website instead. After some quick research like Survey Police, I joined and completed surveys for them. They use a point system where after you reach 100 points, you can trade for a $10 gift card.

This is the survey site that I earned some bitcoin on. I played some game apps through it to earn points faster, games like Final Fantasy 15: A New Empire.

When you are completing something like this though, there is a time limit and you may not earn points playing the app that you installed through them. The time limits vary and they can be two weeks more or less.

What I learned so far about earning bitcoin with survey apps and other apps focused only on bitcoin are when they say you can earn bitcoin, it’s not a complete bitcoin. Instead, you get fragmented pieces of bitcoin that are called Satoshi.

And that you need bitcoin wallets to hold your bitcoin and that there are different types available and have a different value for each of them.

I’m still learning about bitcoin and encourage others to do their own research before they invest their time and energy in this area. I wasted some time and energy trying out some apps from the Google app store where the points were not given out and the app owner pretty much took everyone’s accumulated satoshi. Some other apps were either removed or disappeared from the app store.

The ones that I am still trying out, or that do work, and would share are:

Remember to do some research before you try something online, if it looks too good to be true, it probably is. There are a lot of scams on the Internet, I’ll be creating a post on how to avoid scams in the near future.

Thanks for reading! And if you have any questions, leave them down in the comments and I’ll answer them as soon as possible. 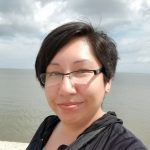 I help women entrepreneurs and bloggers grow their blogs and business with Pinterest. I also enjoy drinking iced cappuccinos and playing video games in my spare time